Mellendrama is a hashtag on Twitter to describe what can only be termed as the ongoing saga of Edwin Mellen Press (EMP) versus, well, anyone who has anything remotely unkind to say online, protections of free speech or well established case law supporting opinion articles be damned. The other post title I came up with was “John Cougar Mellendrama”, but in Blind Melon’s only hit song, “No Rain” (a staple of my generation’s high school music and famous for its dancing Bee Girl video), there’s a lyric I can’t resist for this post.

All I can say is that my life is pretty plain,
Ya don’t like my point of view,
Ya think that I’m insane.
It’s not sane, it’s not sane.

I’ll just leave it at that.

If you want the short version of what has happened, avail yourself of this Canadian Broadcasting article that briefly outlines the lawsuit by Edwin Mellon Press against McMaster University and librarian Dale Askey over a less-than-kind blog entry Askey wrote in 2010. (They dropped the suit against the university, but not against Askey.) If you like a detailed timeline loaded with links, check out John Dupuis’s rapidly expanding post which chronicles the whole affair. And if you want to see someone have a field day with this situation, then TechDirt is the place to go. Really, they dissected it and it’s a joy to read.

The latest salvo is a ‘cease and desist’ letter sent to Scholarly Kitchen, the blog of the Society for Scholarly Publishing. EMP actually sent two letters; one for a blog post and another for a comment to that blog post. Scholarly Kitchen posted the letters they received; here’s the one for the blog post itself. 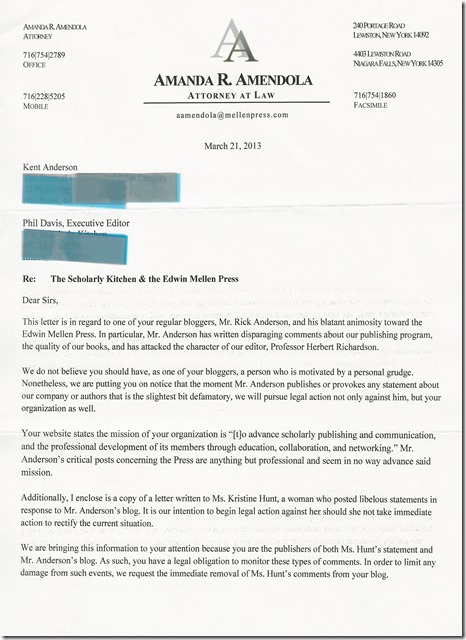 (I did not ask permission to repost these images, so SK give a yell if you want me to take them down. My apologies in advance if that’s the case.)

In case you’re wondering what kind of horrible things were written, the magic of the internet allows you to go back in time and see it for yourself thanks to the Internet Archive. Furthermore, the comment in question is #5. Go on, give it a read. Meanwhile, the trackbacks to the current Scholarly Kitchen post continue to grow as the word gets out regarding EMP’s latest move.

This activity comes in sharp relief to a statement within the press release in which EMP drops their suit against McMaster University on March 4th.

“The financial pressure of the social media campaign and pressure on authors is severe. EMP is a small company. Therefore must choose to focus its resources on its business and serving its authors.”

Pair this with a statement given to The Chronicle of Higher Education on the week of March 29th, three weeks later.

Mr. Richardson could not be reached for comment on Friday, but in an interview this week he told The Chronicle that his lawsuit against Mr. Askey would not be the last in his fight to protect his reputation as well as the reputation of the press and its authors.

“It’s going to develop and develop,” Mr. Richardson said. “It’s a little bit of a cyclone, and it isn’t quite clear where the eye of the cyclone is going to form. But the eye could be over the practice of people using the social media to anonymously bully other people.”

This would suggest to me that this is just the tip of the cease & desist/ libel/defamatory legal action iceberg. While you might be thinking about how non-anonymous the blog authors have been so far in this saga, their first (and thus far, only) newsletter dated October 2012 suggests that where they are headed. (You can read their newsletter from their website by mousing over the surprisingly named Newsletter tab and clicking on Current Newsletter link.) This bit was at the bottom of the publication.

The first link goes to a 2007 post with four comments on it. My guess is the “anonymous bullies” are the posters being referenced to with the second link that takes you to The Chronicle’s forum pages. (I found it much faster to find the forums they were referencing by Googling “mellen press reputation”. Seriously, it’s the top two results. But you can search for “Edwin Mellen Press” in The Chronicle’s forum search box and get the same results.)

There are multiple threads on the press, some of which date back to 2007. Posters on the forums have usernames, which is the next thing to anonymous when it comes to message boards. Is this where the next series of letters and lawsuits is headed? I would guess yes on the basis of the information available right now.

This story isn’t without a twist, however. Roy Tennant posted the discovery of Edwin Mellen Press by way of a pseudonym registering DaleAskey.com, DaleAskey.info, DakeAskey.net, and Daleaskey.org back between October 2011 and May 2012. A Google Document put together by Dave Pattern also shows that the Press had registered “TheMcmaster-mellencontroversy.com/net/info/org” addresses as well back in March 2012. I can’t even fathom a guess as to why either was done. Nope, can’t think of anything.

Overall, it’s been commented that this whole story reads like a case study of the Streisand Effect. In trying to squash the negative press, Edwin Mellen Press has elevated it to a front and center issue that can’t be ignored by librarians, academics, and other publishing entities. To me, the most logical series of events on where it goes from here is this: less reviewers will be interested in evaluating their titles for fear of any kind of reprisal. Less reviews means less opportunities for publicity and exposure in journals and magazines that people use for collection or curriculum development. Less opportunities mean less sales as people never hear or read about the book. Eventually, it’s the end of the business.

I have to admit that this is the kind of drama that I like to watch unfold on the public stage. First, it doesn’t involve me (although since I linked to the offending posts, who knows if there is a letter that will fly my way. I doubt it but that way this case is shaping up it is not out of the realm of possibility.) Second, it can only get weirder from here on out unless they drop their lawsuits and tactics. The academic librarian community is only so large and they work with faculty all the time when it comes to adding titles to the collection. Wayne Bivens-Tatum gives the best spin on this possibly:

I wonder what damages a publisher the most: someone writing a critical blog post, or a series of lawsuits and threatened lawsuits that target a number of academic librarians, which then go public and anger the very librarians who buy (or now maybe won’t buy) so many of the publisher’s books? I guess we’ll find out.

There is a undeniable ripple effect that is emanating out of this and only Edwin Mellen Press can control how large the waves get. At the rate these waves are increasing and intensifying, the only thing I can say is, “Surf’s up.”

Defend The Freedom to Read: It's Everybody's Job! Click to find out more information about reporting book challenges or removals!