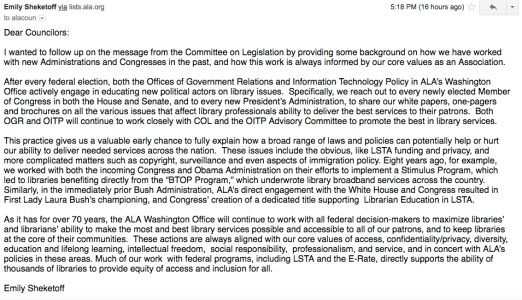 I feel bad for Emily Sheketoff.

The Washington Office of ALA has the odious task of working with whatever elected officials are sent there by the American people. Every two years, this task begins anew as a new Congress is sworn in. Granted, the re-election rate for Congress is pretty high so they aren’t starting from scratch so there are always a few new faces. But I’m guessing it still means putting on a brave face, compiling the latest library issue data, and going out to impress upon these people that libraries are important, libraries make a difference in a school or community, and that they are worthy of funding. Again.

Their work is not the sort of thing that I take pleasure in (at least at that level of government) and I’m thankful that there are people who like to do this for a living. It is an important mission and it does advocate for library values as well as secure funding sources for library oriented projects. It is a political voice for the organization and it still has a job to do no matter who is sitting in Congress or the White House.

However, this response feels like it is missing a greater point. This isn’t a matter of getting to the right side of the issues whether it is privacy, intellectual freedom, or the digital divide.

This is a matter of being on the right side of history.

In its history, the American Library Association has stood for civil rights, women’s rights, gay rights, and civil liberties. These public stances have been taken at times when it was neither socially popular nor politically convenient to do so. But history, in its grand motions, has shown that librarians were right.

As a public librarian, I would be abdicating my professional principles to proclaim how central the library is to the community while simultaneously turning a blind eye to its most vulnerable members. I can’t proclaim the equality ideal of the public library while forgoing the means to bring equity to its constituents. I can’t be a bystander to an administration that has displayed such deviant ideology that offends our core professional values.

So, librarians have arrived at a moment of history in which such resolve is once again called for, an undertaking that is both moral and necessary. It means standing up to a man and an administration that has shown to be both petty and vengeful, acting with thin skin with a long memory. It means a long journey of abuse, sadness, and instability that are coupled with the misgivings and doubts that difficult tasks invoke. There will be fear, anxiety, and all the mental tricks our brains play that tell us to quit and give in.

It is the hard path to choose, but the right one to take.

Will we be fearful and cowed, or brave and right once more?

One thought on “The Long Arc of the Moral Universe”

Defend The Freedom to Read: It's Everybody's Job! Click to find out more information about reporting book challenges or removals!