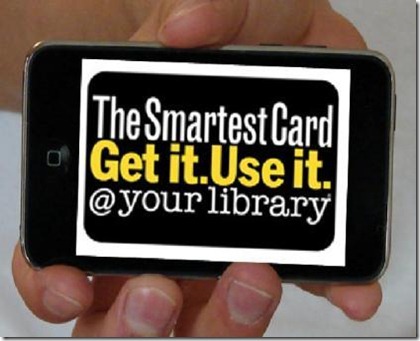 While I was taking a break working on a blog entry, this post by Patrick Sweeney about getting rid of library cards showed up in my Google Reader. He talks about replacing library cards with user names and passwords, with authentication control happening at the library locations. I thought this was such a different take on the one traditional part of the library experience that I started to write a reply. What I wrote grew beyond what felt like a simple note so I decided to drop my current post and craft this one.

So,  with the spirit of Patrick’s post in mind (getting rid of library cards), I started to think about what existing technology that we have now that could be adopted to fit this ultimate goal. In leaning back in my desk chair and rolling the puzzle around in my head, I brought it down to a few requirements: provide the same level of authentication (for privacy), provide the same level of permissions on and off site (for access), and be arguably easier and cheaper than the process it replaces (issuing library cards). Under those guidelines, I’d like to propose some additional alternatives to the library card (with varying degrees of viability).

1.) Cell phone wallet: Popular in the countries like Japan and South Korea, your library card information is stored on your mobile device. Simply by swiping your phone on a signal reader, you can use it for all of your library business (e.g. checking your account, borrowing materials). Computers in the library could be fitted with readers. For offsite authentication (such as remote account and database access), the user could simply retrieve their stored card number from the phone.

The major con for this is that not everyone has a cell phone, whether they are too young (think babies, toddlers, kindergarten through whenever their parents want to five them phones) or they cannot afford one with cell phone wallet capability. While the technology is popular in other countries, it has not taken off in the United States. In addition, this could also pose account management issues with people wanting to lend their card to others to check out materials, use computers, and other situations of permissible card lending. Unlike a card, a cell phone does not lend itself as well to lending.

2.) Fingerprint Scanner: No need to carry a card when you are using your fingerprint for authentication. Fingerprint scanners have come down in price to being under $100, a figure that is relatively easy to reach. Just scan your thumb or forefinger at the circulation desk or computer lab to prove your identity. It’s more reliable and secure than a library card since fingerprints are a unique biometric. The patron’s privacy is secure behind the fingerprint; it also completely removes the need to remember a library card while providing an accurate way of identifying patrons.

As nifty as this would be, it completely fails the off site authentication test. It would have to rely on a supplemental piece of material so that people could remotely access accounts and databases. However, for libraries where the materials and databases are not generally reached offsite (think of certain types of special libraries), this might be the right approach to securing access to sensitive materials. Like the cell phone wallet, it also creates the same issues for lending of library cards or allowing multiple people to use a card. Also, it does not address the issue of the small number of people who are without hands.

3.) A hybrid RFID card/’one button’ authenticator: Ok, so this device doesn’t exist, but it does take two types of existing technologies that would not work for the purposes of this idea experiment and put them together. Yes, it’s still something people would need to carry, but I think it could have broader implications and aspirations for a simple library card.

The RFID provides the on site identification for materials. Swipe the card past a reader, do your library business, done. I think the potential for RFID in libraries goes further by acting as a library card in multiple locations. The idea of a single card being able to access multiple locations (for example, your library, your state’s library, and the Library of Congress) would be the ideal; a single library card to access everything.

The one button authenticator provides the off side identification. Pressing the button provides a unique and time sensitive series of numbers to be entered into the interface to provide access. This is used currently in the private sector for secure computer networks (including the largest massively multiplayer online roleplaying game, World of Warcraft, with over 13 million players) Within a combined system, it could provide remote access to accounts and subscription materials for a spectrum of libraries.

While it solves the problems of remote access that are shared by the cell phone wallet and fingerprinting, each technology carries its own baggage. RFID has privacy and security implications that make it a vulnerable means while the ‘one button’ authenticator has the chance of failing like any other computer chip. In addition, there is the additional cost this would incur in the form of cards, readers, and staff training.

I will admit that it is a bit of technology overkill for solving a simpler problem, but it was still fun to imagine. I really liked Patrick’s post because it was bold in its questioning of a status quo. Perhaps libraries won’t replace cards, but it doesn’t hurt to go back and examine practices to either reaffirm, renovate, or remove them. It is this kind of inquiry that tests the boundaries and makes the occupation and practice more interesting to me.

Overall, I think there are alternatives to library cards, but it is on a location and library type basis. There are enough nuances to this that, in the right situation, a library could replace their cards with something else. Perhaps it is on this micro scale that card alternatives could be considered, so long as it is a true replacement and capable of community-wide acceptance. In any case, I wouldn’t think it would be a daring statement to say that anything that eases the patron-library interaction would be possible welcome addition.

Defend The Freedom to Read: It's Everybody's Job! Click to find out more information about reporting book challenges or removals!
Join 524 other followers